skip to main | skip to sidebar

My new book is also now available on Amazon.
Posted by Tom Beckett at 4:55 AM No comments:

Early yesterday morning I was shoveling snow.  This morning I dealt with a sewer backup and am waiting for the drain service now.  It's always something.

Plumber has come and gone.  I've cleaned things up again. 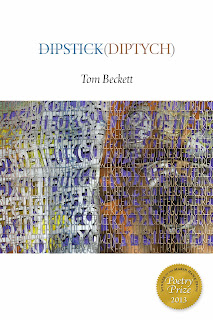 Earlier today I was trying to bend a note by pushing a string up a full step.  Of course the results weren't quite what I'd hoped for, but then I remembered an interview where Clapton was asked if he still practiced. Clapton replied that he still practiced bending notes.  That comforted me.

I should have started guitar at 16.  Not 60. But physically and psychologically it wouldn't have been possible for me in 1969.

Hindsight is a preoccupation of mine lately.  I tend to recognize things at a remove but not so much in the moment.

Guitar is all about being in the moment.

Wrote the first new fragment for Appearances in 2 months.  Worked on a single sentence, off and on, for the last 4 hours.

Am also fiddling with the beginnings of a lyric poem and doing a new collaborative sequence with Thomas Fink.

What tends to get me through projects isn't stellar intelligence.  It's stubbornness.  Persistence matters as much as anything.  Something I need to remind myself of when I'm tempted to smash the guitar, shred the manuscript,  or delete the blog.

Alex Gildzen On My New Book...

Thanks, Alex.
Posted by Tom Beckett at 4:53 AM No comments:

Last night I met my friend Branton for dinner (fish tacos at Cajun Dave's), then we played a game of pool at Dominick's (I won for a change).  Our ultimate destination though was the Kent Stage where Jimmie Vaughan would be playing (it was JV's birthday by the way).

Vaughan put on a great show. It was a privilege to watch him and his band (the Tilt-a-whirls) play.  Too much fun!

Today I'm going make a mega-batch of spaghetti sauce so that the freezer can be restocked.  The elements: crushed tomatoes, tomato paste, water, ground beef, lots of mushrooms,zucchini, carrots, garlic, oregano, basil, bay leaf, red wine and time (it simmers for around 3 hours).  Tonight it'll be served with spinach salad, good bread and wine.  Parmesan cheese and crushed red peppers will be available also.  Can't wait to get started.

Vaughan plays with a capo, effectively adjusting the neck of the guitar with every song.  Interesting.  He can rock but he knows how to swing too.  The trumpet, sax and stand up bass played with him in really rich ways that I'm still thinking about.

There was a hiatus there while I got the sauce started.

Interesting moment in guitar class on Wednesday.  We were warming up with chromatic scales in triplets.  Jim, the teacher, after a while, said "Stop and watch what Tom's doing."

Of course, at that point, I was jolted out of doing into consciousness of what I was doing and my hands went klafooey for which I apologized.

Jim said what he wanted to point out was my economy of movement as something to shoot for--I was at once proud and mortified.

Guitar playing, I'm starting to understand, is very much about positionality.  Knowing where you are on the fret board and where you need to go next..

Spaghetti sauce is more like a poem than a fret board.  It's all about layers.

Richard Lopez On My New Book

Richard Lopez on Dipstick (Diptych): here.  Thank you, Richard!
Posted by Tom Beckett at 3:30 AM No comments:

My New Book Is Alive

Dipstick  (Diptych), my new book from Marsh Hawk Press, arrived yesterday.  It's a thing of beauty.

Marsh Hawk has a picture of it at its website but doesn't yet have my author page up or have things set up with Small Press Distribution for purchasing via the web.  That should happen pretty soon.

If you can't wait for a copy, contact me directly at saneeetee3 at aol dot com.  It's a $15 cover price, but  I'll cover the postage.

snackcident
Posted by Tom Beckett at 6:10 PM No comments: